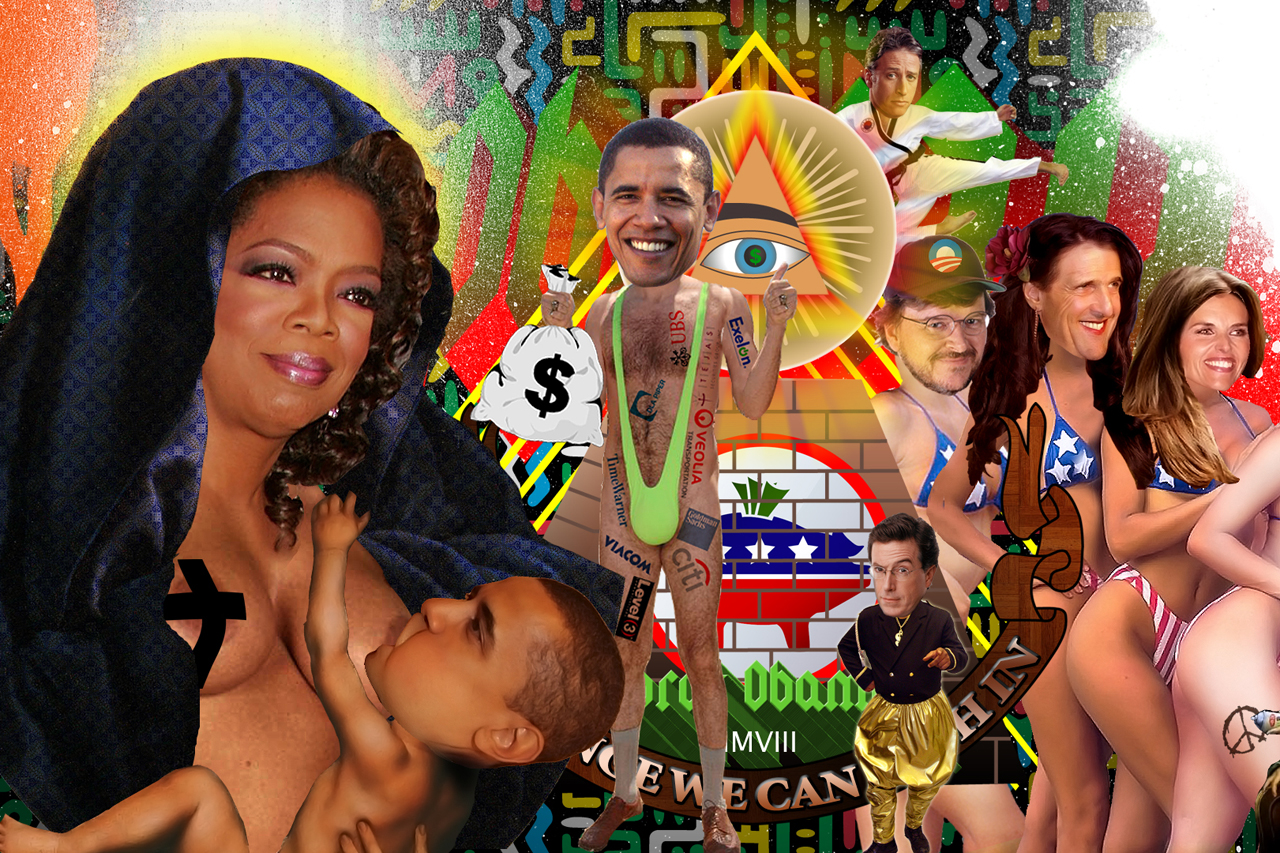 Residential Erection is devoted to the 2008 US Presidential Election and its unprecedented place at the intersection of politics, popular culture and media manipulation of the political process. Today’s headlines are tomorrow’s history, the action-packed video animation retelling and contextualizing the election. Casting the Democratic and Republican candidates into various identities including Borat Obama, John McCain the Donkey cheerleader and Hillary “Asimo” Clinton, the precisely researched video hits hard at the hypocrisy of political rhetoric of recent years, and the troubled State of the Union. As hilarious as it is scary, it merges internet-scavenged imagery and original animation with pop graphics to create factual or semi-fictional relationships between the familiar political figures, corporations, and mass media iconography.

Residential Erection is an installation piece that consists of two 8ft X 8ft pop-up book sculpture and a high definition video. The animation video expresses the creator’s political perspective on the 2008 presidential election. Almost every piece of graphical elements in the video has direct reference and political meanings. Please read the “Storyboard Breakdown” for more information.

All of the scenes appear in chronological order 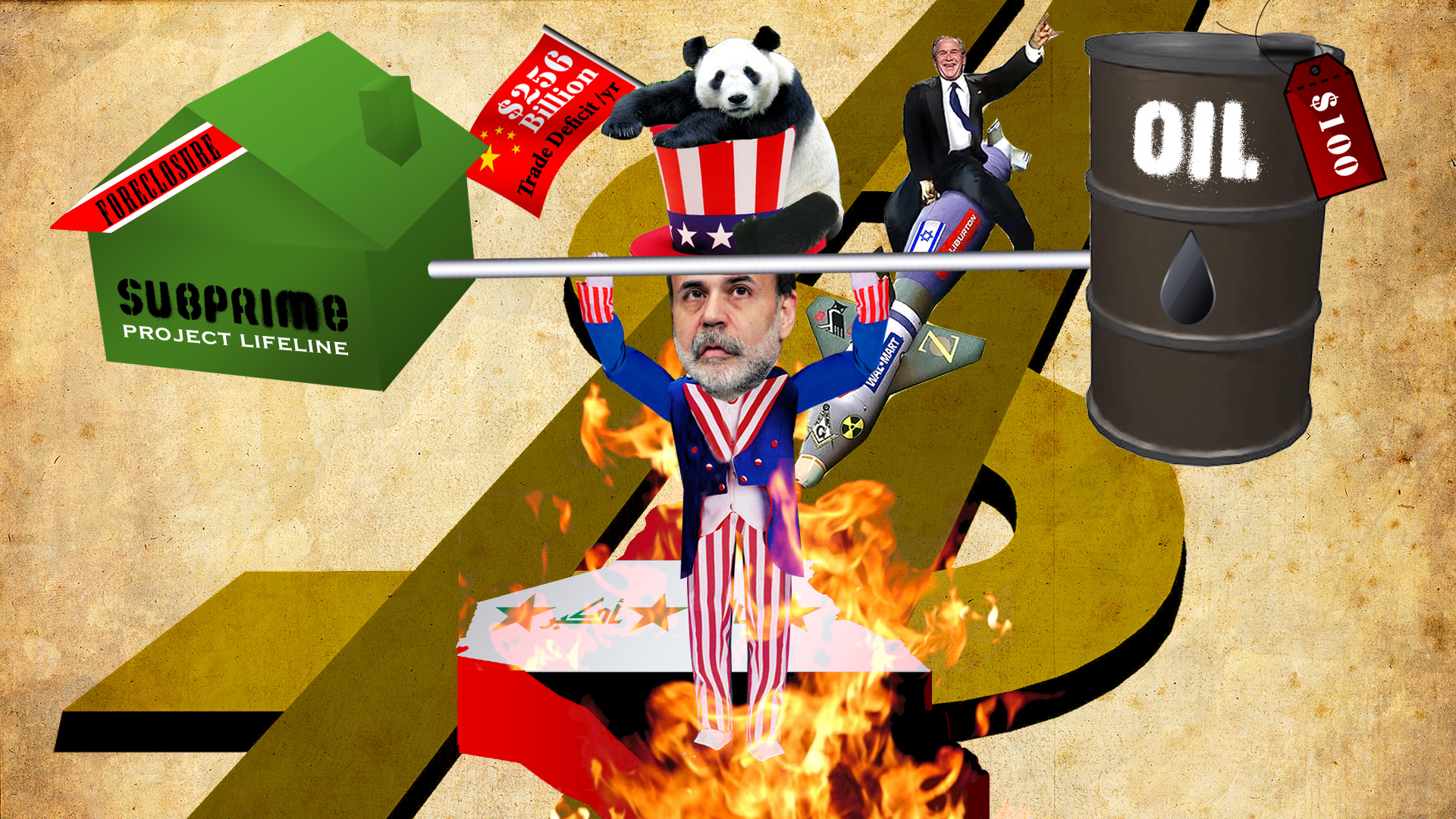 A subprime balloon explode and knock down the foreclosure sign. Federal Reserve chairman Ben Bernanke as Uncle Sam trying to balance a weight with subprime mortgage credit crunch on one side and $100 crude oil barrel on the other while stepping on a burning Iraq flag. Meanwhile, a Chinese panda appear on his hat with a flag says $256 Billion Trade Deficit per year. While carefully balancing the weight Bernanke got hit from behind by a rocket full of corporations logos rode by George W. Bush. 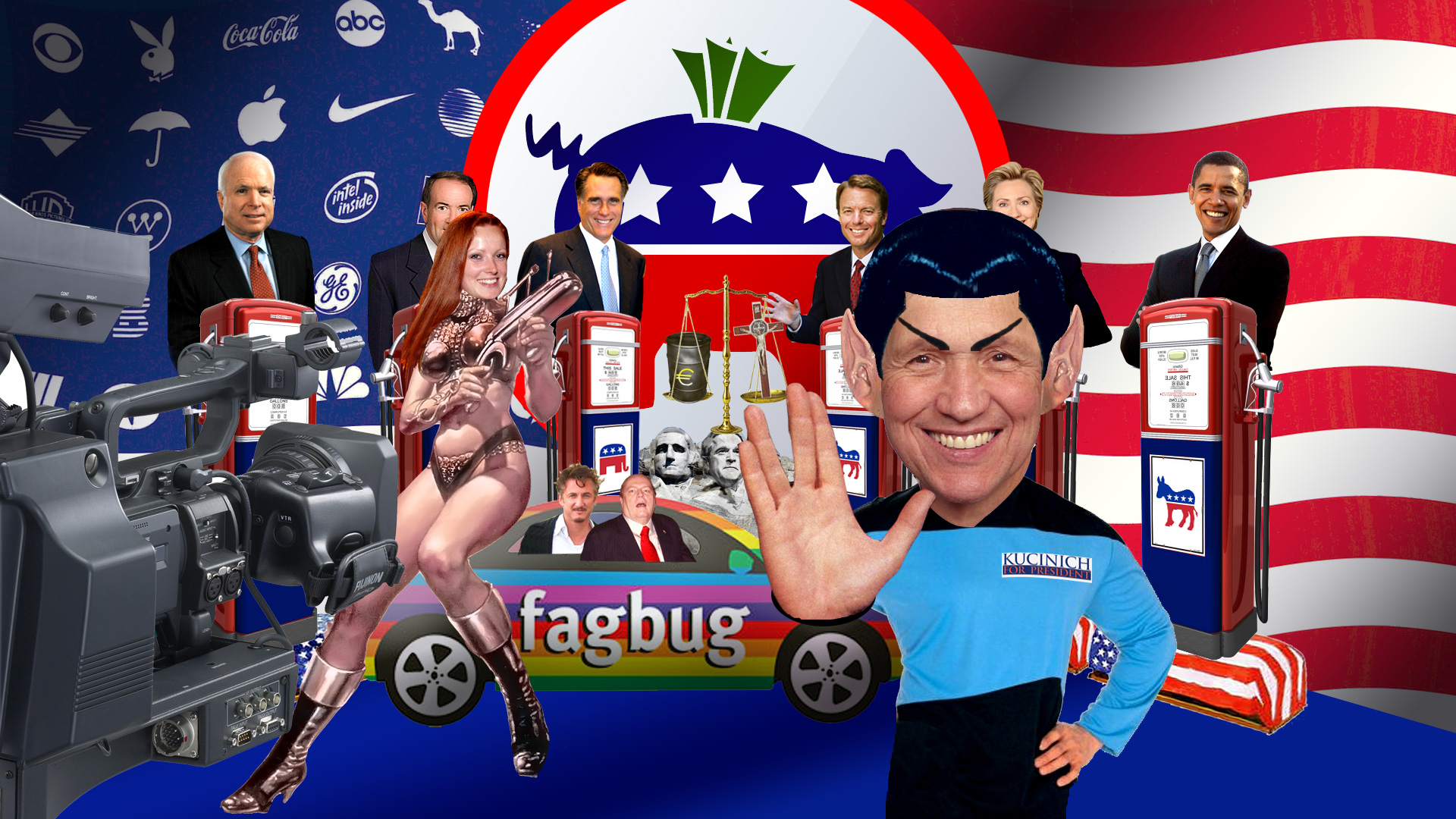 The stage and major candidates of the presidential frontrunners appeared with the corporate America flag as the backdrop. The debate podium is made with a gasoline pump on top of a military coffin draped with US flag. In the center lies the Rushmore monument with G.W. Bush face on it. A Justice libra with a barrel of oil and a cross balancing each other. The “FagBug” with Elizabeth Kucinich as Barbarella, Sean Penn and Larry Flynt arrive the scene. All of a sudden, a UFO enters and “beams” Kucinich who dress as Mr. Spock and land him into the scene. While Kucinich attempt to do the “Spock Peace sign” the TV studio camera shoot laser at him and shrink him. Then all the candidates start saying “Change” and flood the screen with the words. 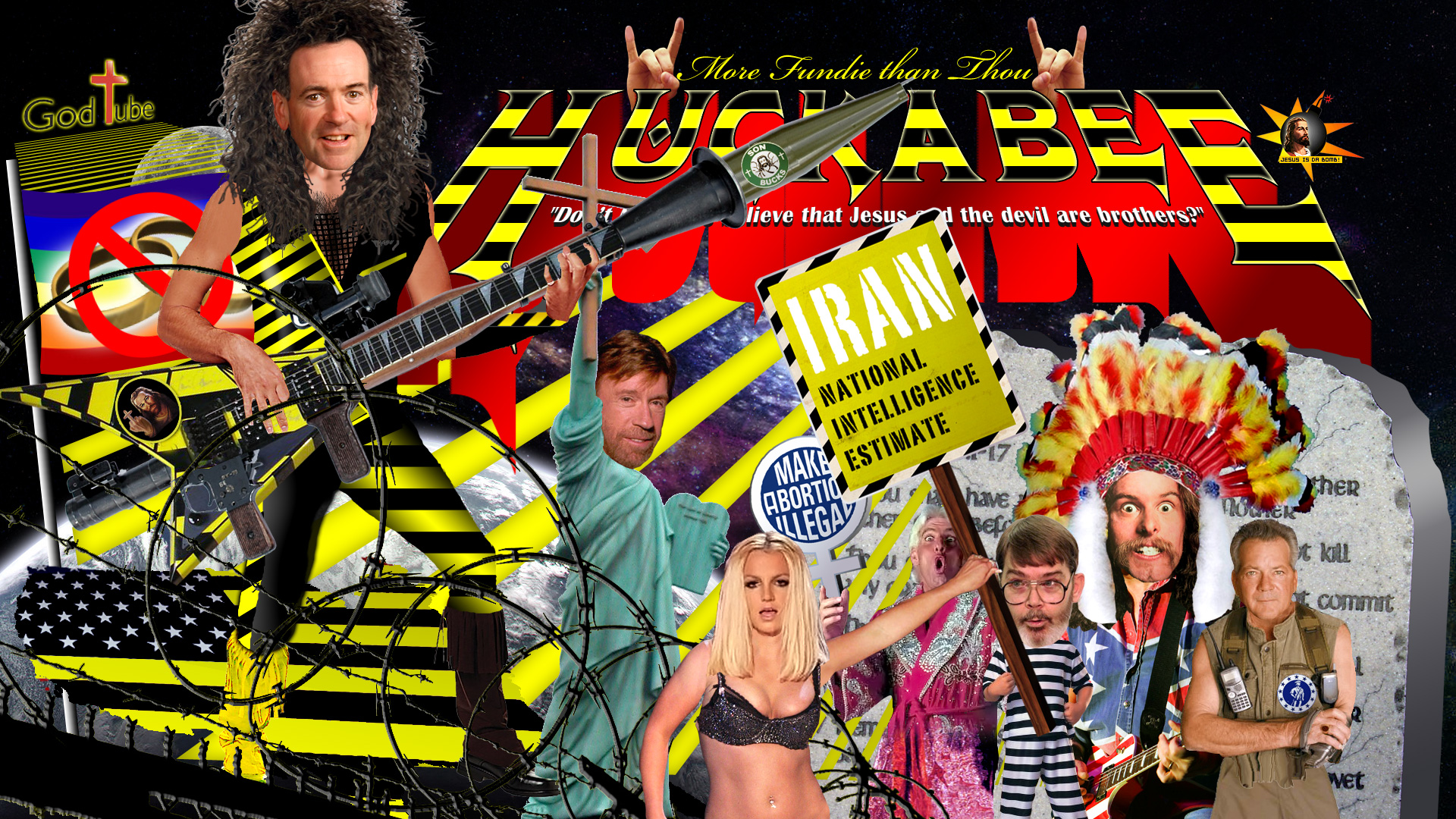 Huckabee appears as the guitarist of the Christian heavy metal band Stryper, holding a hybrid of guitar and bazooka. On the same stage is his buddy Chuck Norris as Statue of Liberty holding a cross. Down the stage are his fans- wrestler “The Nature Boy” Ric Flair, Wayne Dumond– a serial rapist/ murderer, Ted Nugent and Jim Gilchrist, the founder of the civilians border patrol the Minuteman project. While all of them are head banging to Huckabee’s music Britney Spear appear with a sign saying “Iran national intelligence estimate” and start dancing badly like her performance in MTV Video Music Award. Then Huckabee strikes a strong musical note that shapes like a cross towards Britney and turns her into a Ten Commandments Stone. Same situation happens to all the fans. Then Huckabee shoot the rocket from his bazooka. The rocket got a “SonBuck” logo on it. 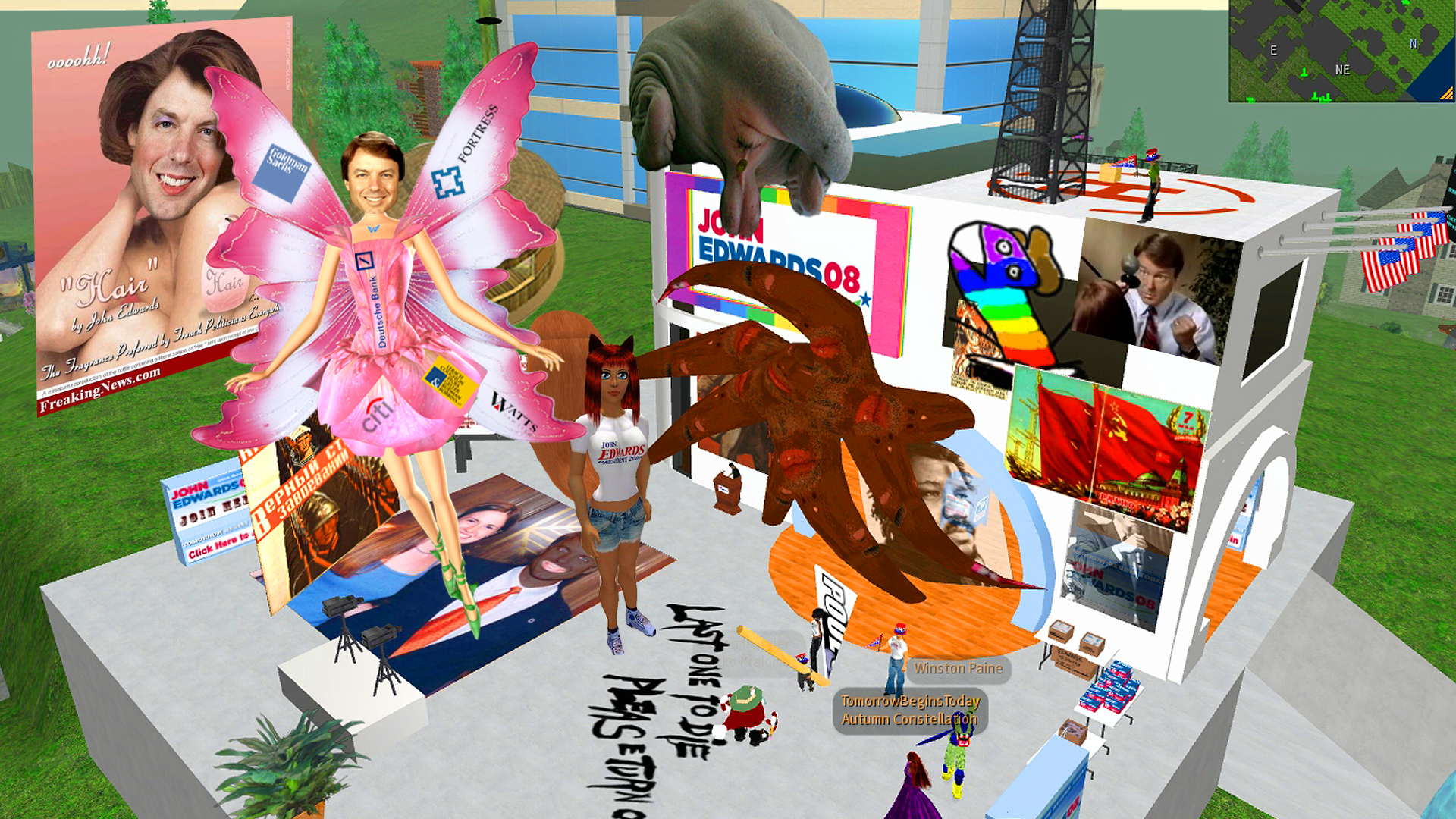 Huckabee’s rocket shoot towards John Edwards’ campaign headquarter in Second Life (right after it got attacked by the “Griefers”). Edwards, as a Virtual World Fairy, trying to stop the rocket by hugging it. Edwards travel to the next scene which consists of posters created by users from FreakingNews.com and Bill Richardson in Mariachi costume. Failure to stop the rocket takes Edwards to the next stage. 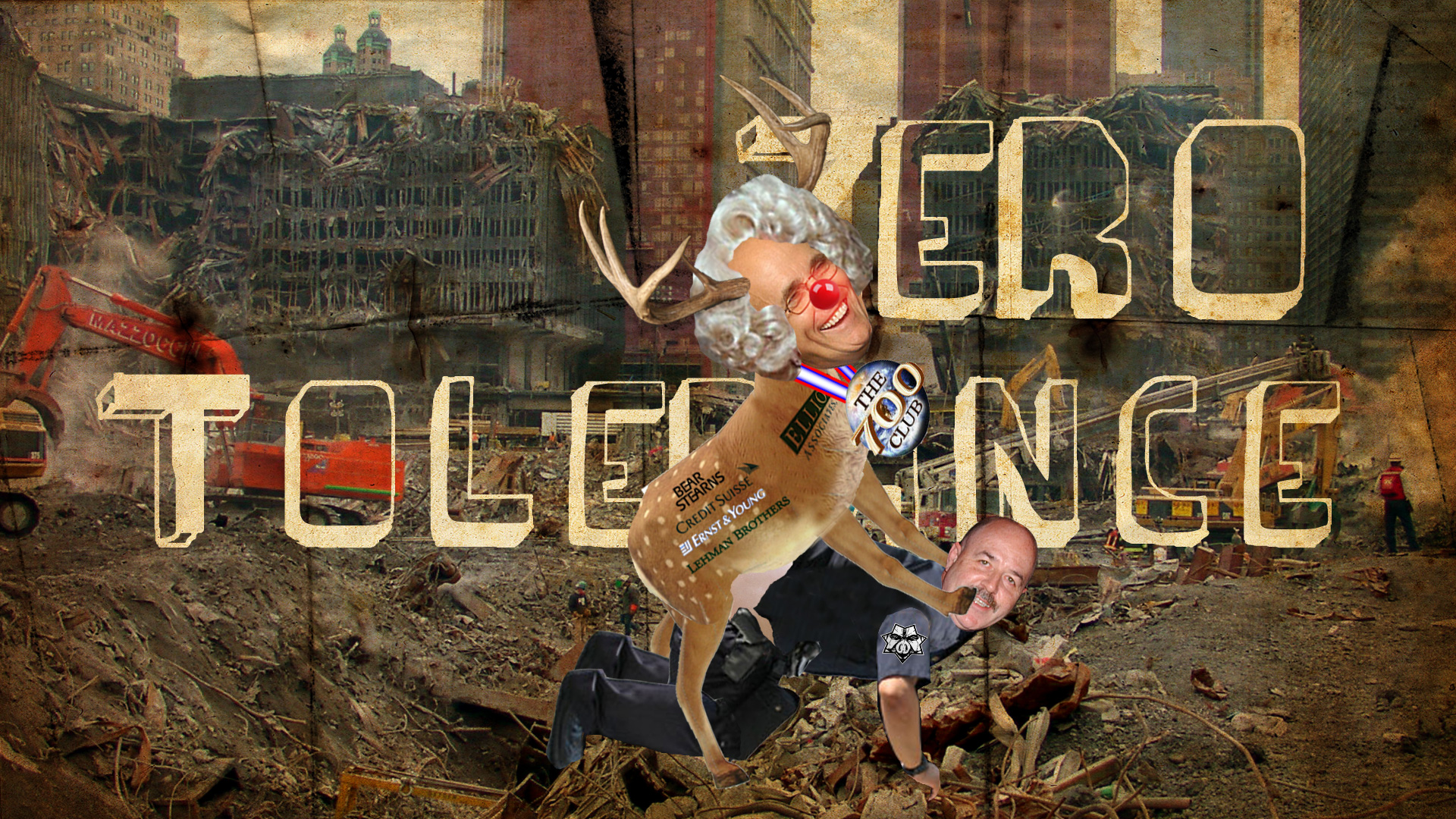 Edwards still trying to stop the rocket while flying by a backdrop of World trade Center ruins with “Zero Tolerance” words on it. Down on the ground Rudy the Drag-queen reindeer are having some intimate moment with Bernard Kerik– former New York Police Commissioner and former nominee of Secretary of Homeland Security who was indicted by a federal grand jury on charges of conspiracy, tax fraud and making false statements. Edwards cannot stop the rocket, then go to the next stage. 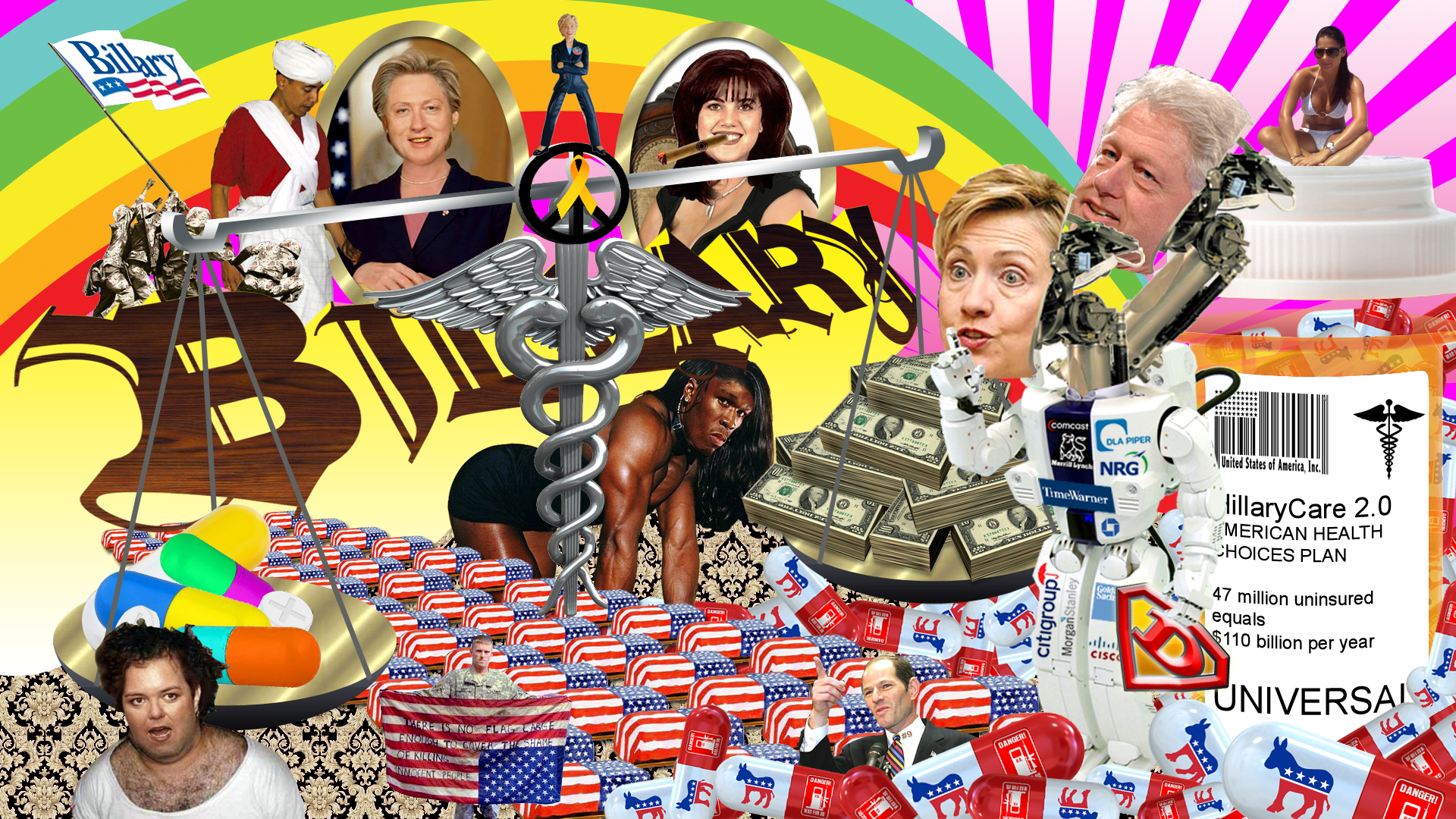 Edwards finally is able to stop the bomb, with the backdrop of a Super Delegates logo (appropriating the Superman logo). When the bomb exploded on the ground kills Edwards and a lot of military coffins appear on the same spot. A gigantic capsule with one side bearing a Democrats logo and the other half a “Danger War For Oil” sign come out from the explosion. The capsule split and a huge drugs container labeled with words “HillaryCare 2.0– American Health Choice Plan” appears. The drugs container opens and Hillary “Asimo” Clinton- the most advanced Humanoid Robot “ASIMO” appears. Then a giant Red Phone with “The Great Seal Of Global President” dropped from the sky, and come “Billary, Monica Lewinsky, Rosie 0’Donnell, Eliot Spitzer/ Kristen and 50 cents. A Medical symbol libra with pills and stack of cash on opposite ends pop up. Obama dresses in Somali clothing all of a sudden pop-up and Bill Clinton appears in one of the Asimo head and destroy him. Hillary jumps onto the money side, unbalancing the libra and suck the pills from the other side into her stomach. Then she extends her extra four heads and start spitting pills everywhere. 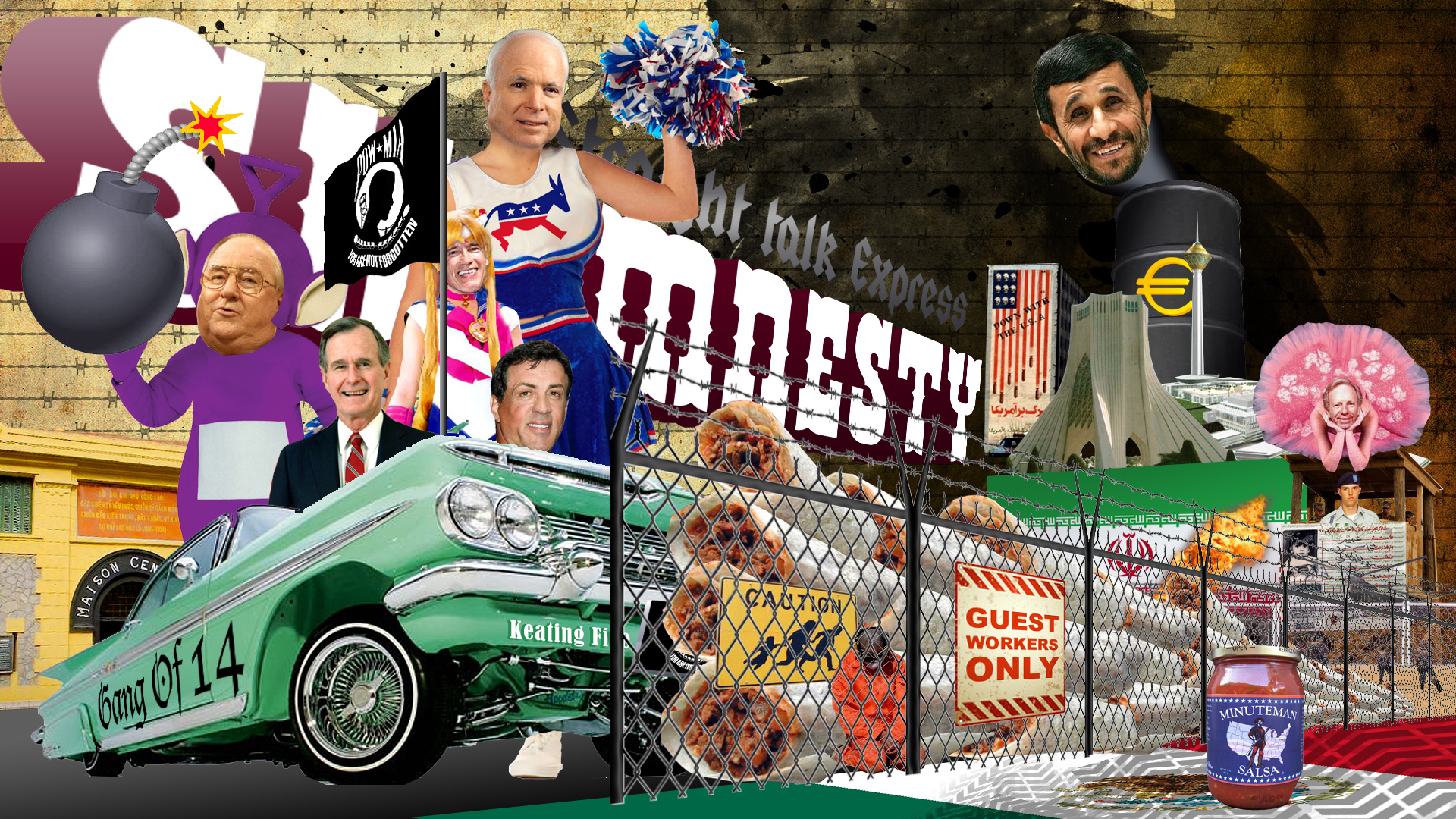 John McCain as the cheerleader for Democrats comes out from the “Hanoi Hilton” and arrive in his “Straight talk Express”- a hotrod low-rider with signage of “Gang of 14”, “Keating Five” and “P.O.W.” on it. On the same car seats his gangbangers- Sylvester Stallone, Arnold Sailormoonegger, Jerry Falwell and G. H. Bush. The car stopped at the Mexican border then a wall of burritos and chain-link fence are being built to separate the border. On the Mexican side military tank tracks appear on its ground and a Minuteman Salsa appear right on the middle of the Mexican flag. Meanwhile, a big words saying “Shamnesty” appear in the backdrop. Then the second set of background appears as follow: a watchtower guarded by Pfc. Jesse V. Spielman with a birth certificate of Abeer Qassim Hamza al-Janabi on the structure, on top of it sits a ballerina Joe Lieberman, Iranian capital Tehran with architecture symbols Azadi Square and Borj-e Milad, and finally an oil barrel with Euro sign with Mahmoud Ahmadinejad as the genie. McCain starts dancing with his version of the Beach Boys tunes “Bomb Bomb Bomb, Bomb Bomb Iran”. A bomb appears in Jerry Falwell hand while McCain is still dancing, then Falwell throw the bomb towards Iran and entire screen exploded. 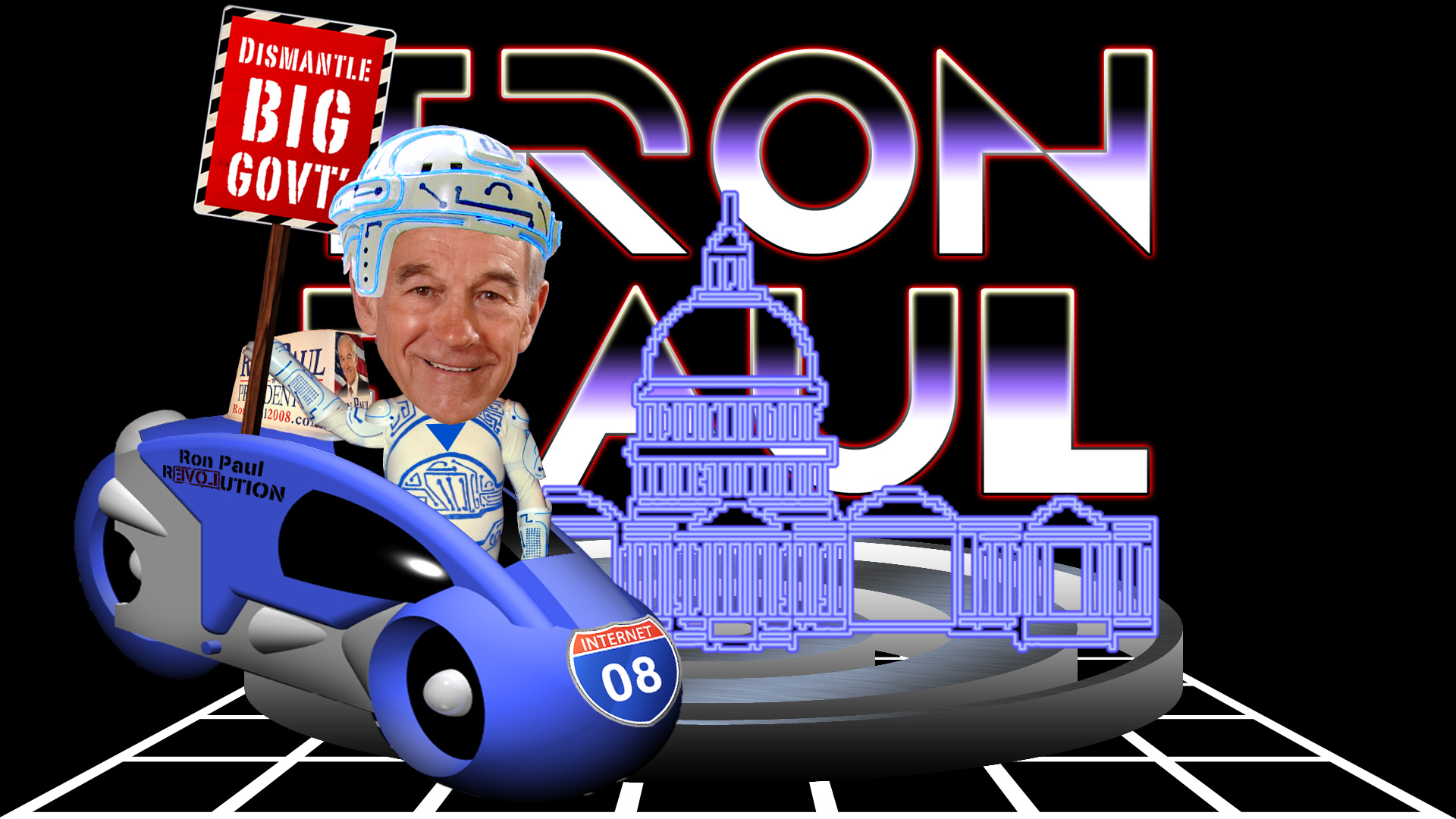 Ron Paul appears as “Tron Paul” with Jay Maynard’s Tron Guy costume, riding on the light cycle. He passes by a Diebold voting machine with George W Bush as Hellraiser shooting electricity everywhere. A neon light Capital Hill building structure appears from center. Tron Paul then disintegrates it with his “Dismantle Big Government” sign. Then the screen fades into the Constitution. 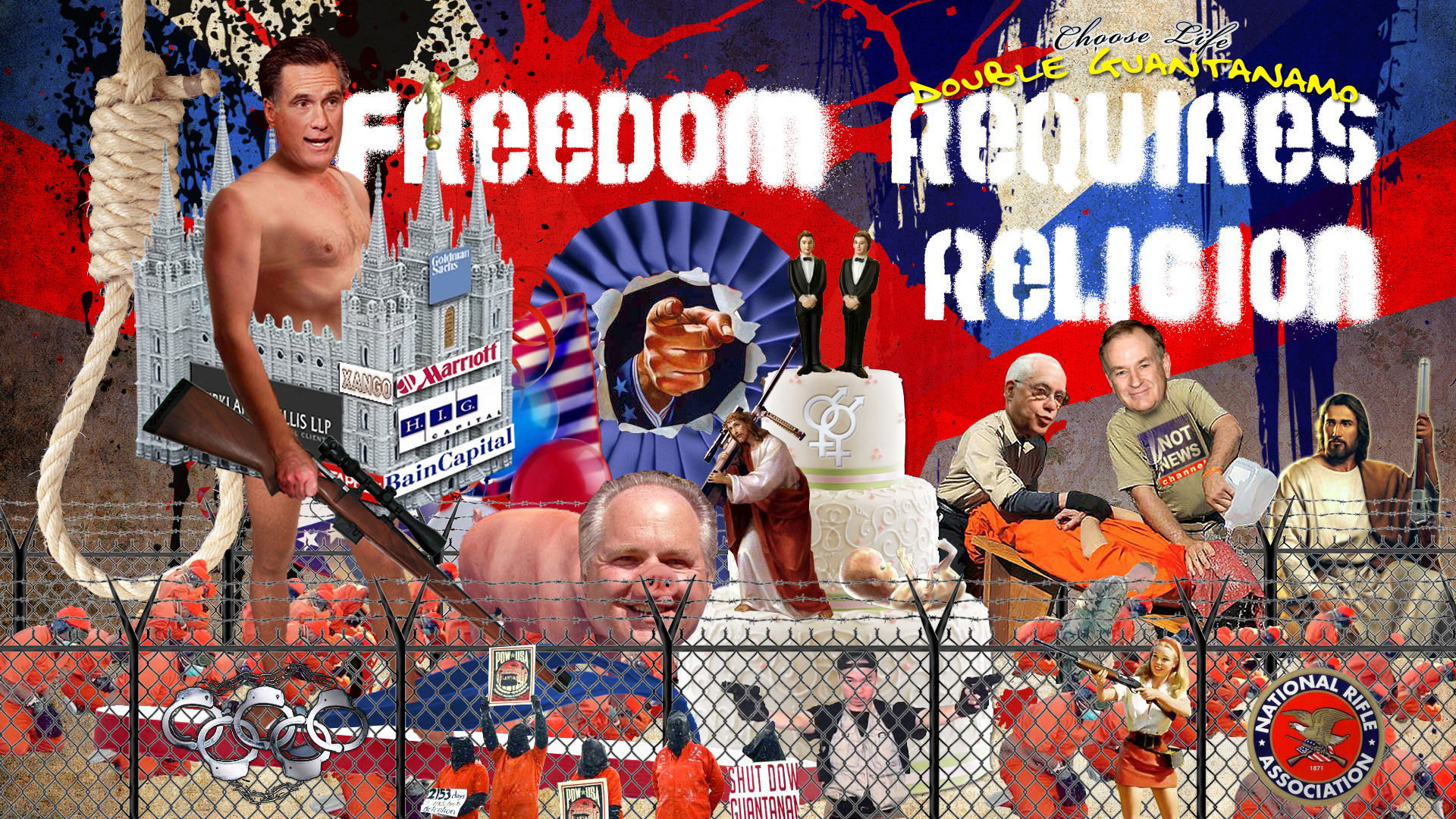 With the constitution graphics as background, the background structure that consists of the following appears: “Freedom Requires Religion”, “Double Guantanamo”, TV host Bill O’Reilly and Attorney General Michael Mukasey performing waterboarding on a Guantanamo detainee, VT school shooting perpetrator Seung-Hui Cho, a wedding cake with two grooms figure on top, Jesus holding a gun and a fenced-in area with numerous Guantanamo detainees. Mitt Romney appears wearing the LDS Salt Lake Temple, with a rifle in his hand, riding on a giant red, white and blue Flip-Flop. Romney first shoot the two grooms, place Rush Limbaugh (as pig) on top of the wedding cake, then he jumps up and down and flatten the detainees, leaving blood stain on the ground. Romney then keep shooting at Seung-Hui Cho until he is down. Romney is very happy that he lifts his arms and the Temple drops, a very strong light streak comes from his reproductive organ “light wash” the screen.

OBAMA, OPRAH AND THE ANNUIT COEPTIS: 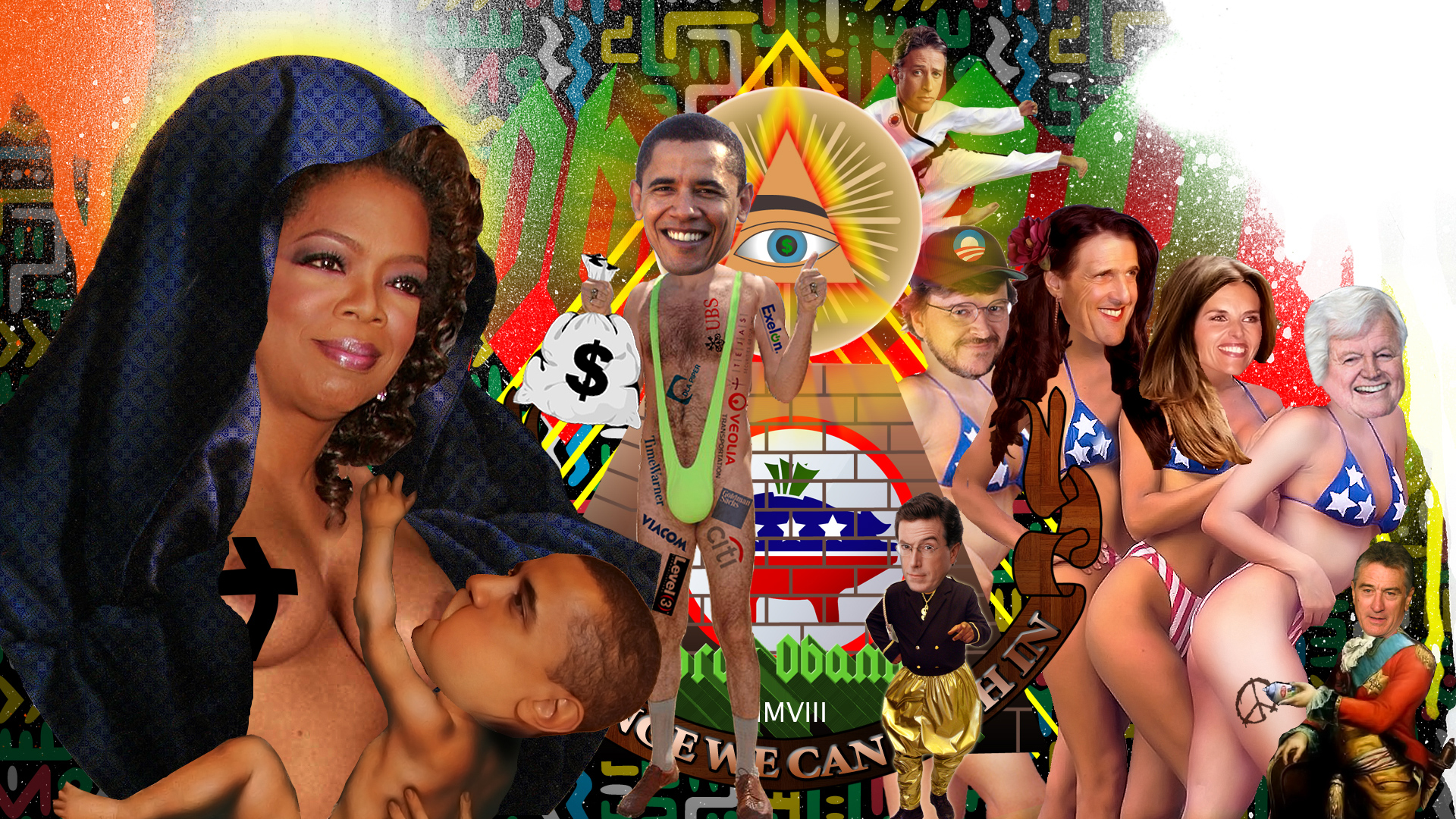 Oprah appears as the Black Madonna, breastfeeding baby Obama. After fully fed, Obama turns into “Borat Obama”. Meanwhile, the Annuit Coeptis structure appears, along with the bikini girls Ted Kennedy, Maria Shriver, John Kerry and Michael Moore, then John Stewart as karate kid, Robert De Niro as Banksy’s “Soldier Holding Spraycan” painting and Stephen Colbert as MC Hammer appear, and a dance party happen. The screen zoom out and turns out that the dancing party is from a Diebold voting machine resembles as a television in a living room. 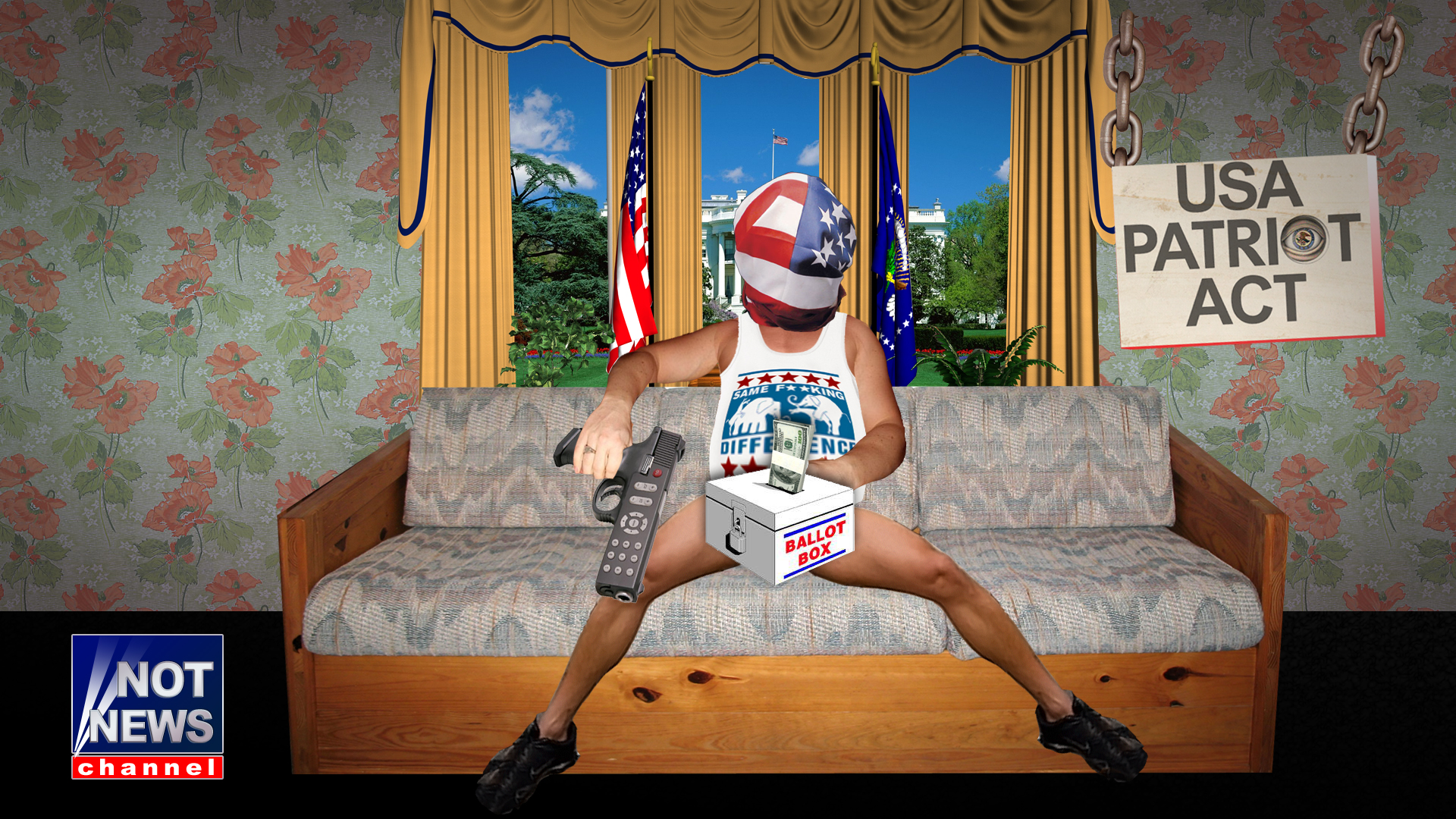 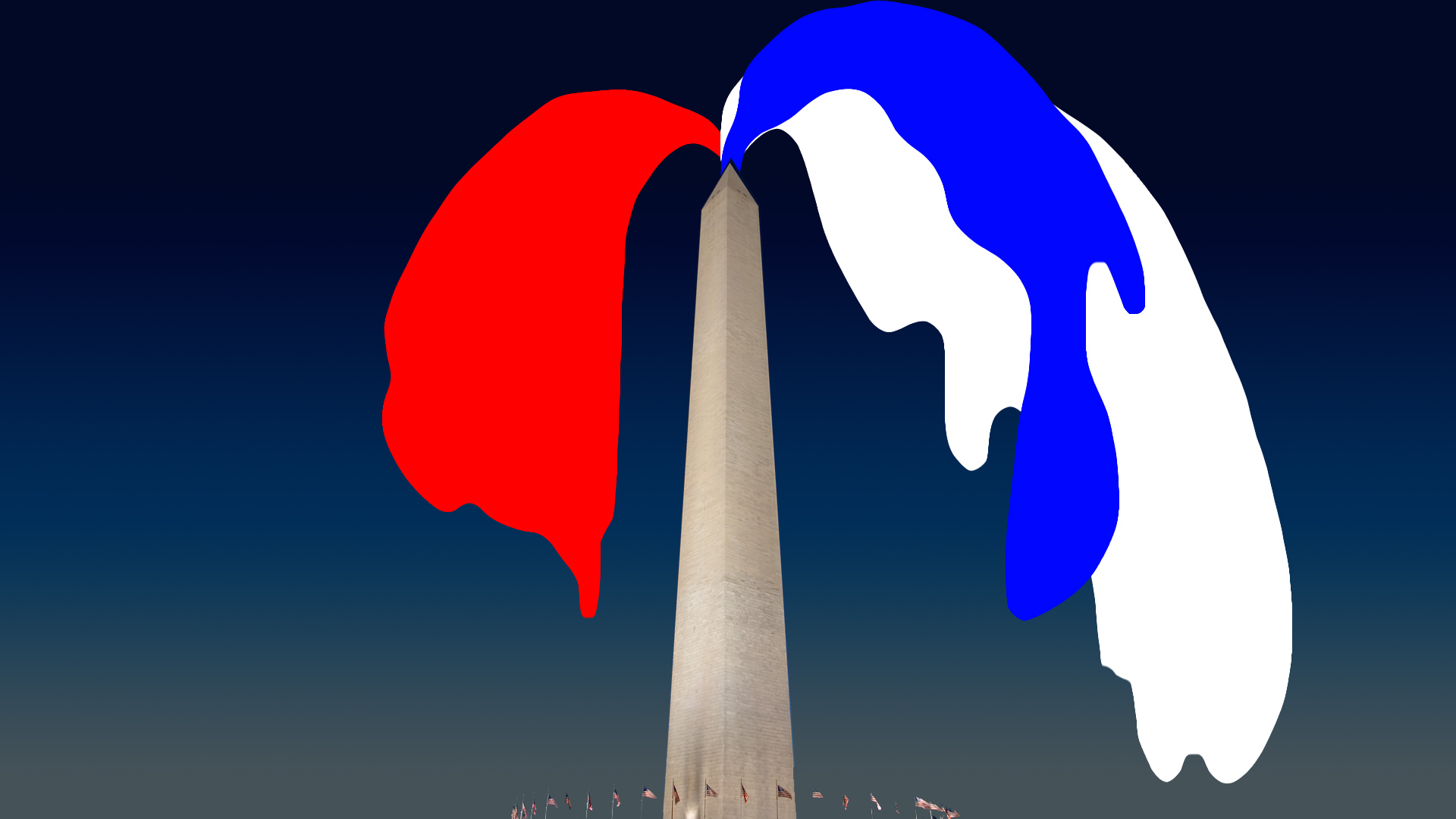 A man is masturbating (with a ballot box covering his genital areas) on a couch in a room while watching the Diebold TV. His head is wrapped with an American flag (resemble John Heartfield’s photomontage “Whoever Reads Bourgeois Newspapers Becomes Blind and Deaf: Away with These Stultifying Bandages!“), his right hand is holding a TV remote control that resemble the shape of a hand gun. There’s a sign saying “Patriot Act” in the room. Outside the room is the White House. On the lower left corner a “Not News” logo resemble the FOX news logo. When the man reaches his climax the screen turns into the Washington Monument exploding red, white and blue colors from its tip. The end.