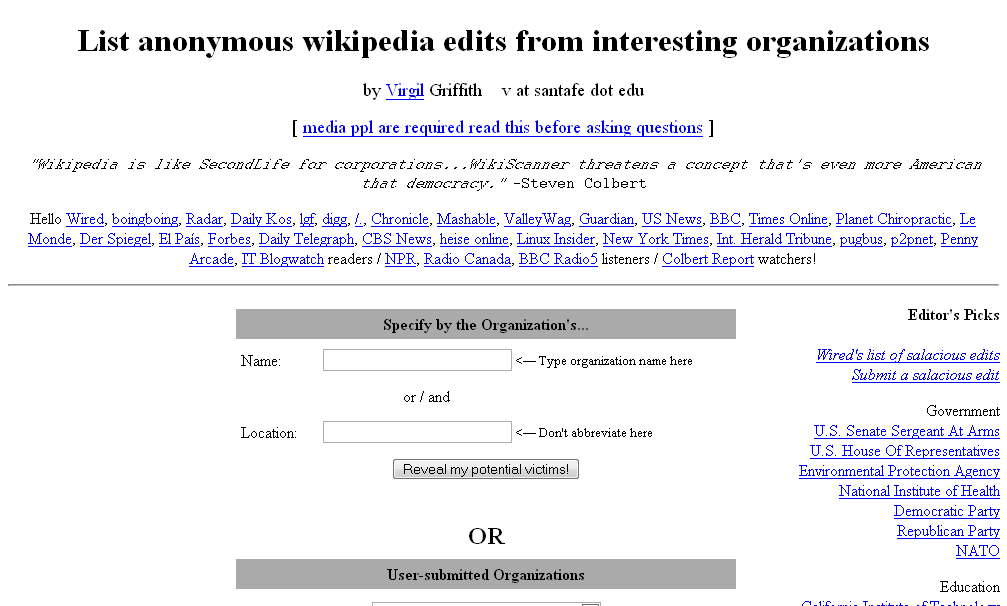 Since the debut of Wikipedia, many academics denounce its credibility because of “amateur” users contributing information that are not being “recognized” by the scholars (I see it as not approved by government its captialism baby).

Finally, Virgil Griffith, a smart-ass Grad student at CalTech, is smart and honest enough to break the whole confines and creates a searchable database named Wiki Scanner “that ties millions of anonymous Wikipedia edits to organizations where those edits apparently originated, by cross-referencing the edits with data on who owns the associated block of internet IP addresses”, according to Wired.

What he finds is a “database of 34.4 million edits, performed by 2.6 million organizations or individuals ranging from the CIA to Microsoft to Congressional offices, now linked to the edits they or someone at their organization’s net address has made.”

Someone with an IP address from Wal-Mart made this change:

Wages at Wal-Mart are about 20% less than at other retail stores. Founder Sam Walton once argued that his company should be exempt from the minimum wage.

The average wage at Wal-Mart is almost double the federal minimum wage (Wal-Mart). However, founder Sam Walton once argued that his company should be exempt from the minimum wage.

Not to mention Diebold deleting paragraphs that harm the company’s reputation.
For me, it shows that how important we as “amateur” users have to keep defending our rights to contribute to the internet, or otherwise the internet will turn into another corporate stupid TV (this time Global) that brainwashes us into non-critical social parasites. Also, it will definitely improve the Wikipedia.

Posted on September 3, 2007 in Misc, Technology

The Top-Five Online Art Videos of 2007 and some news
CheapAssFood.com BETA Launch!