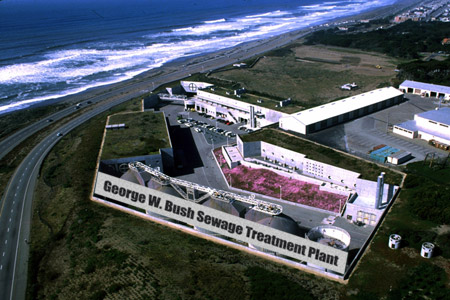 One last chance you can vote for Dubya! Be Patriotic! Freedom is NOT Free! Perform your civic duty protect your civil rights! Haha, I signed the petition to rename the Oceanside Water Pollution Control Plant as the “George W. Bush Sewage Plant” too and I am so happy they make it on the ballot :-) All you San Franciscan better vote for it in November, it sucks that I don’t live there no mo.

From the Presidential Memorial Commission of San Franciscoâ€™s press release:

Officials at the Department of Elections announced today that the citizensâ€™ initiative to rename the Oceanside Water Pollution Control Plant the George W. Bush Sewage Plant has qualified for the November 4th San Francisco ballot. Voters will decide on the measure in the general election alongside the presidential election, numerous statewide initiatives, and an expected 20 to 30 local measures.

Beijing Olympics
Some of my upcoming exhibitions and screenings