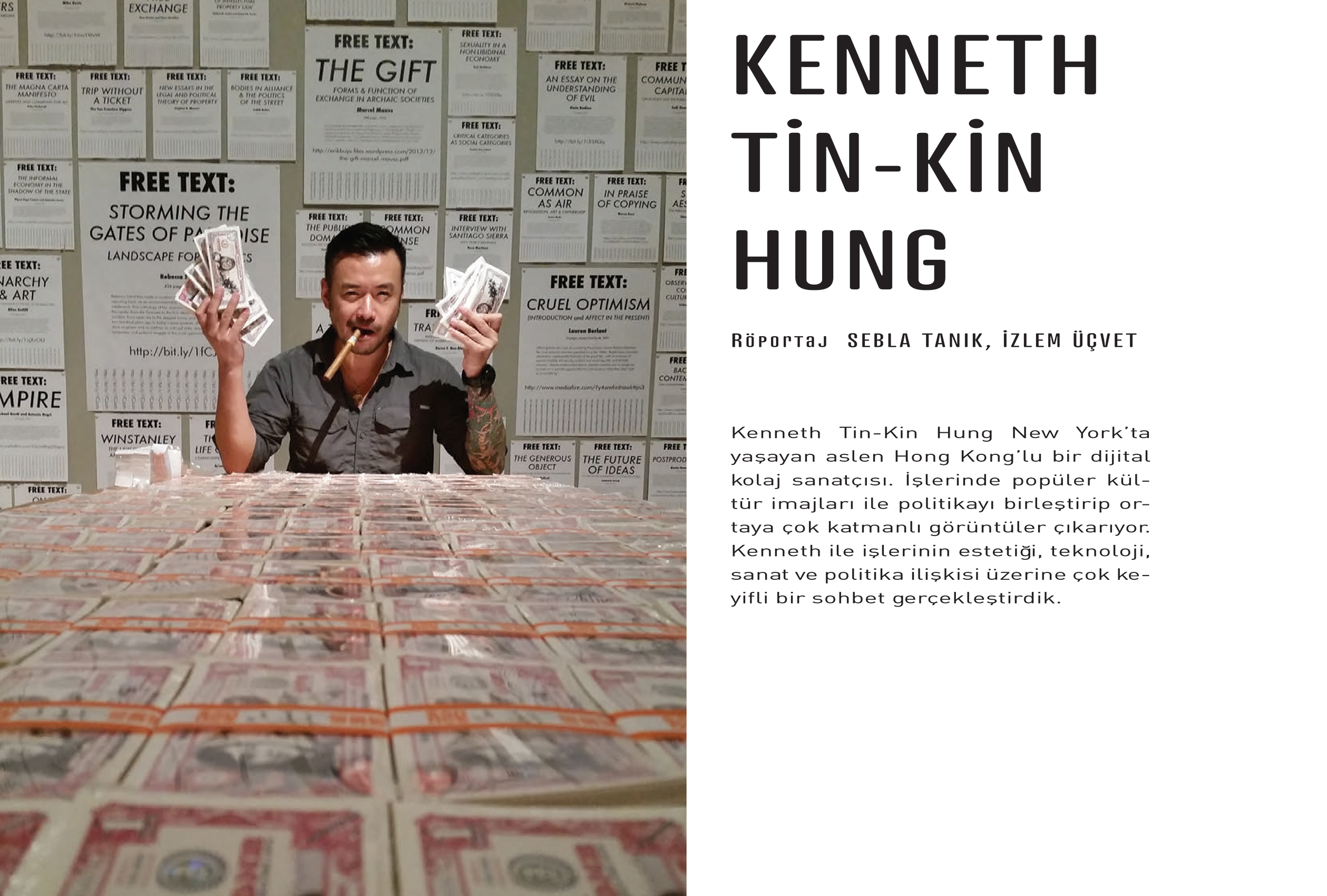 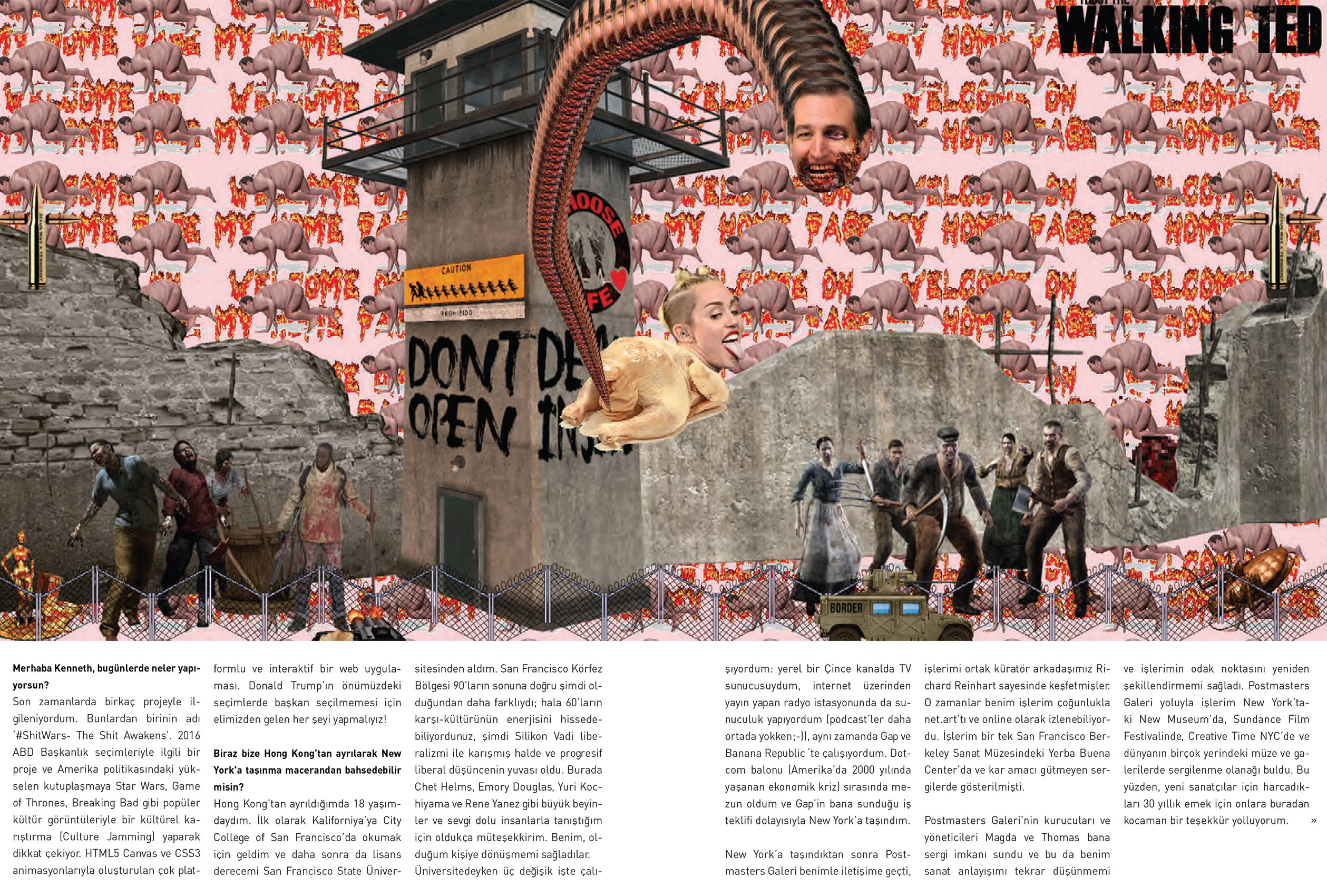 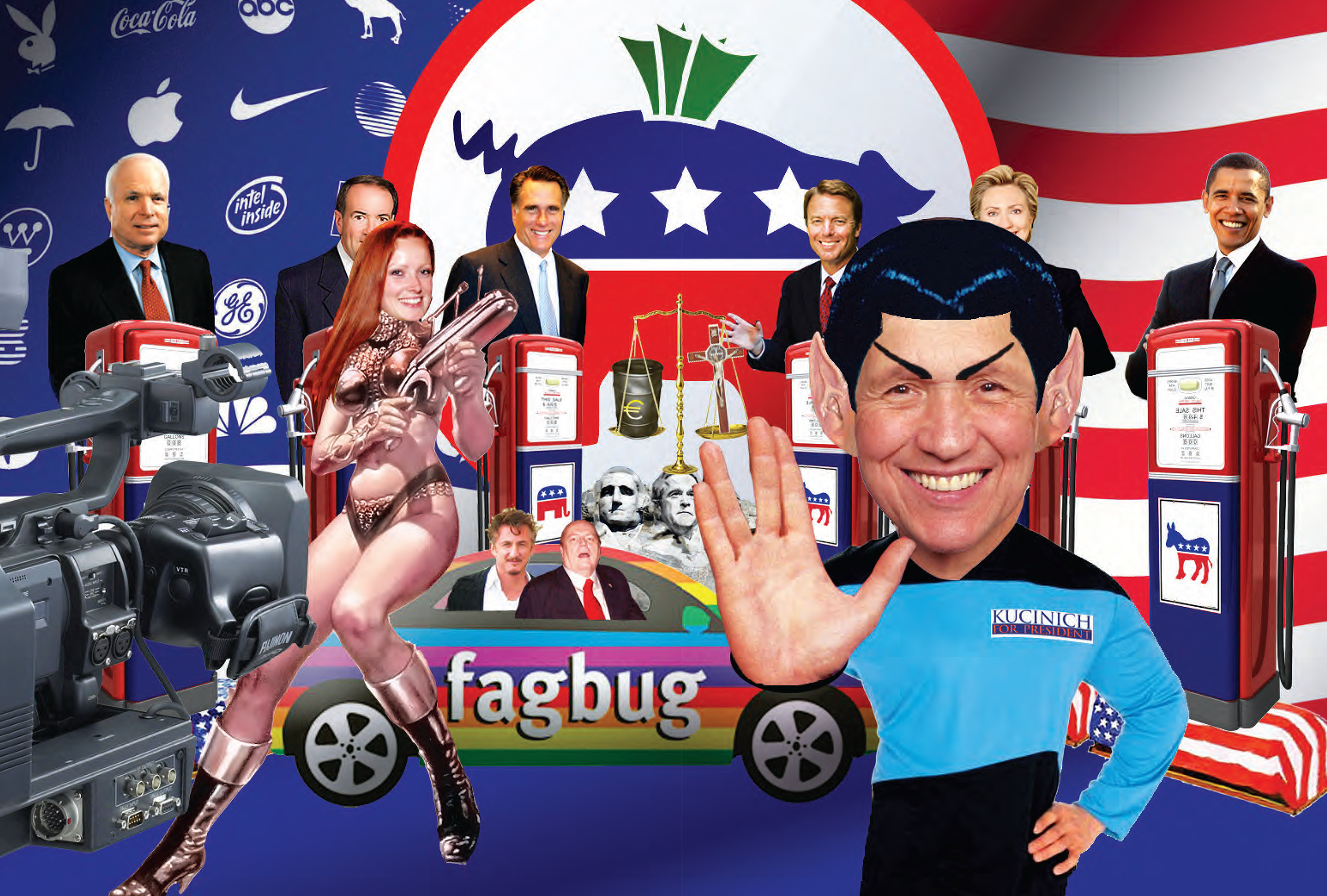 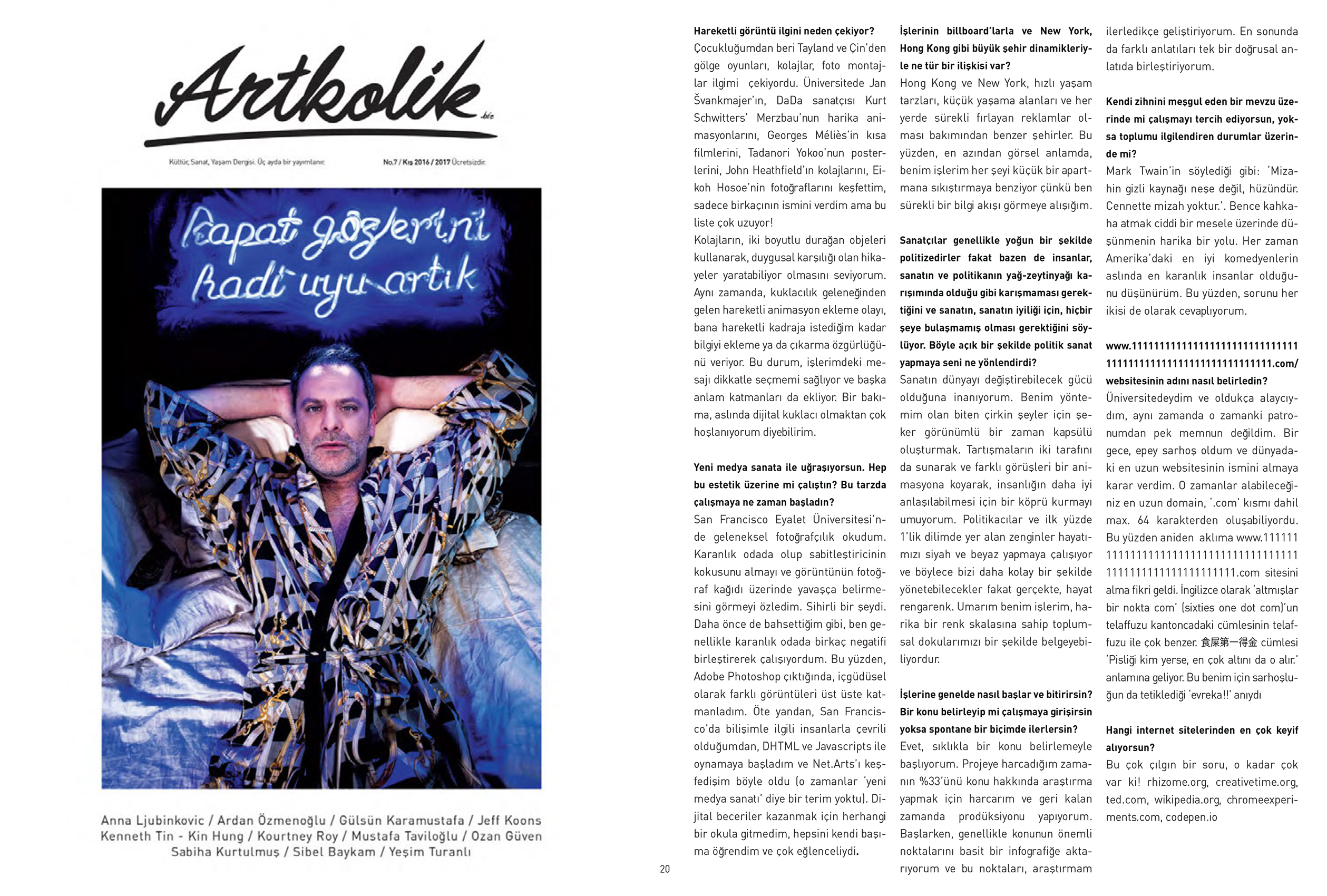 I am super honored that I was interviewed by the Turkish magazine Artkolik. The magazine is available in Istanbul D&R, Starbucks, The House Cafés and many more exclusive venue. Pick one up if you are in Turkey or download at www.Artkolik.biz. Below is the original interview in English:

1) Hello Kenneth, what are you up to these times ?

I have been busy working on a few projects. One of them is called “#ShitWars- The Shit Awakens.” The series is about the 2016 US election and addresses the increasing polarization of American politics by Culture Jamming pop imageries including Star Wars, Breaking Bad and Game of Thrones. It is a cross-platform interactive web-app project that built with HTML5 Canvas and CSS3 animations. We have to try everything we can to prevent Donald Trump from being the new US president!

2) Can you tell us about leaving Hong Kong and moving to New York adventure ?

I was 18 years old when I left Hong Kong. I first landed in California and studied at City College of San Francisco, then got my Bachelors of Arts Degree from San Francisco State University. San Francisco Bay Area was very different back in the late 1990’s than now- you could still feel the energy of the counterculture of the 1960s, mix that with the libertarianism of Silicon Valley and you got a hotbed for progressive liberals thinking. I am grateful that I got to meet peoples with great minds and big hearts like Chet Helms, Emory Douglas, Yuri Kochiyama and René Yañez. They forever shaped me into who I am.

During the college I was working three different jobs: as a TV host for a local Chinese TV show, as the host of a Internet Radio station (before Podcasts existed ;-) and also for the clothing companies Gap and Banana Republic. Eventually after graduating from college during the crash of the “Dot-Com Bubble”, Gap offered me a position in NYC. I took the opportunity and it opened another chapter in my life.

Once I moved to NYC, Postmasters Gallery contacted me. They discovered my works through a mutual curator friend Richard Rinehart. At the time my artworks were mostly net.art that only existed online and I had only exhibited my works physically at Yerba Buena Center for the Arts in San Francisco, Berkeley Art Museum, at non-profits such as Southern Exposure and SOMARTS Cultural Center and other random interesting places such as at the home party of the founder of Burning Man.

Magda and Tamas, the gallery founders and directors of Postmasters, offered me exhibition opportunities which made me rethink my art practice and helped me refine and refocus my works. Through Postmasters, I got the opportunities to exhibited at New Museum in NYC, Sundance Film Festivals, Creative Time NYC, and numerous museums and galleries around the world. So here, a BIG THANK YOU for their 30 years of continuous efforts of bringing emerging artists to the spotlight!

3) What interests you about moving image ?

Since I was a children I was always interested in Thai and Chinese Shadow Puppetry, collages and photo montages. During college, I discovered the amazing animations of Czech filmmaker Jan Švankmajer, DaDa artist Kurt Schwitters’ Merzbau, silent films by Georges Méliès, posters by Tadanori Yokoo, collages of John Heartfield, photographs of Eikoh Hosoe… to name a few, the list can goes long!

I love the fact that collages can create a story with emotional response using only 2D inanimate objects. And by adding the moving animation borrowed from puppetry gives me the freedom to add or subtract as much information as I want in a moving frame. It enables me to carefully select the messages that goes into the works and keep adding layers of meanings. In a way, I enjoy being the digital puppet master.

4) You are working on New Media Art. Was your creating style always about this? How did you start working on this style ?

I studied traditional photography at San Francisco State University. I missed being in the darkroom smelling the fixer and seeing the image slowly appeared on photographic paper. It was magical. As I mentioned earlier, I was into photo montages. I often sandwiched multiple negatives in the darkroom. Therefore, when Adobe Photoshop appeared, it was my natural instinct to layer different graphics on top of each other.

On the other hand, because I was in San Francisco surrounded by lots of interesting Tech people, I started experimenting with DHTML and Javascripts and started exploring Net.Arts (the term “New Media Arts” didn’t exist yet). I didn’t go to school for any training in digital skills. I learned everything on my own, which was super fun ;-)

5) What kind of relationship does your work have with the boards, big displays and dynamics in New York City and Hong Kong ?

Hong Kong and New York are similar in terms of the fast paced lifestyle, small living space and the constant bombardment of advertising. So in a way, at least visually, my arts is kind of like cramping everything into a tiny apartment because I am so used to seeing busy information all the time.

6) Artists are often passionately politicised, yet some say art-politics are like oil and water – they don’t and shouldn’t mix, art for art’s sake left untainted by our daily grind. What guides your decisions to make such overtly political art ?

I believe art has the power to change the world. My main method is creating eye candy time capsules with the ugly things happening now. By presenting and capturing BOTH sides of arguments and different perspectives into one animation I hope to bridge a better understanding of humanity.

Politicians and the 1% riches tried to make our lives black and white so that we can be easily ruled, but in reality, life is full of color. I hope my works can somehow document that beautiful color spectrum of our social fabric.

7) How do you generally start and finish your works ? Do you choose a topic and work on it or is it going naturally ?

Yes. it often started with one topic. Generally I spend around 33% of the project timeframe in researching and the rest in productions. To start I usually lay down all the important elements in a simple infographics with bubbles overlapping each other. Then develop those elements by layering peripherals from the research. Then finally compile the different narratives into a single linear piece.

8) Do you generally make your work for speaking your mind or lighten a topic in people’s mind _?

As Mark Twain said: “The secret source of humor itself is not joy, but sorrow. There is no humor in heaven.” I think laughter is a great way to get people thinking about a serious issue. I always think that in US, the best comedians are the darkest people. So to answer your question, it’s both ;-)

I was in the university and I was very cynical and very not happy with my boss at the time. One night I got a little bit drunk and decided to have the longest website in the world. The longest domain name you can get at the time is sixty-four characters including the “.com”

10) Which internet websites do you mostly enjoy?

Wow this is a crazy question. There are just too many! Here are a few websites that inspired me the most along the way:
I was very inspired by Rhizome!
http://rhizome.org/

I remembered when Wikipedia first came out I was so shocked!!! Knowledge without hierarchical control!
https://www.wikipedia.org/