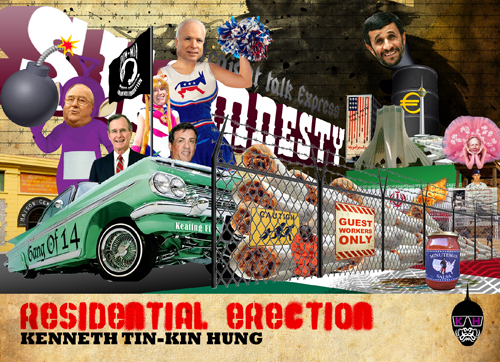 Postmasters Gallery is pleased to announce “Residential Erection” – an exhibition of new works by Kenneth Tin-Kin Hung opening on April 5 and remaining on view until May 10, 2008. The reception is scheduled for Saturday, April 5 between 6 and 8 pm. This will be the artist’s first solo show with the gallery.

Postmasters’ exhibition is devoted to 2008 US Presidential Election and its unprecedented place at the intersection of politics, popular culture and media manipulation of the political process.

At the center of “Residential Erection” is short, action-packed video animation retelling and contextualizing the election and two monumental pop-up book structures depicting the fields of Democratic and Republican candidates. The precisely researched video hits hard at the hypocrisy of political rhetoric of recent years, and the troubled State of the Union. As hilarious as it is scary, it merges internet-scavenged imagery and original animation with pop graphics to create factual or semi-fictional relationships between the familiar political figures, corporations, and mass media iconography.

At risk of giving away the ending:

FINAL SCENE- MEDIA, PATRIOT ACT AND WASHINGTON MONUMENT– A man is masturbating (with a ballot box covering his genital areas) on a couch while watching the Diebold TV. His head is wrapped with an American flag (resembling John Heartfield’s photomontage “Whoever Reads Bourgeois Newspapers Becomes Blind and Deaf: Away with These Stultifying Bandages!”), his right hand is holding a TV remote control in a shape of a handgun. There’s a sign saying “Patriot Act” in the room. Outside the room is the White House. On the lower left corner a “Not News” logo is based FOX news. When the man reaches his climax the screen turns into the Washington Monument exploding red, white and blue colors from its tip. The end.

“Gas Zappers”, a video in which Tin-Kin Hung takes on the subject of climate change and the politics of global warming, will be shown in the second gallery. Both “Gas Zappers” and an earlier work “Because Washington is Hollywood for Ugly People” starring George W. Bush, his cabinet, and an international cast of world leaders and pop stars, have been shown at Sundance Film Festival in Park City this January. “Washington/Hollywood” is currently on view at The New Museum as a part of “Unmonumental” exhibition (until March 29). In her New York Times’ review Roberta Smith wrote that Hung’s video is “like the cover of the Beatles’ “Sgt. Pepper” album or the credits of the Monty Python television show, with jet fuel.” (July 20,2007)

Kenneth Tin-Kin Hung’s work is not about “lessness”.