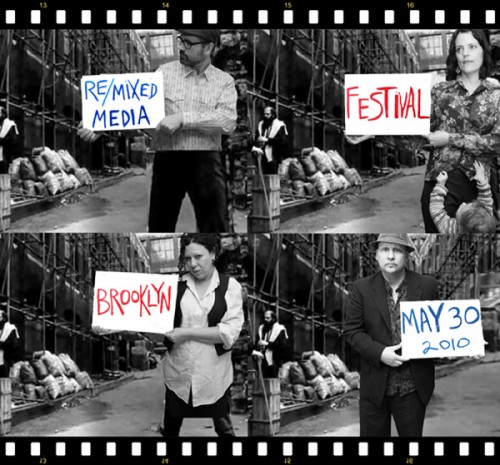 Please come to the RE/Mixed Media Festival 2010. I will be on the artist panel discussion around 3:45pm and being one of the judges for the remix competition screening around 8:15pm. Hopefully see ya there!

The RE/Mixed Media Festival is our way of contributing to the ongoing conversation about remixing, mashups, copyright law, fair use, and the freedom of artists to access their culture in order to add to and build upon it.  While there are numerous events addressing these issues, they are usually discussion-based, featuring lectures and panel discussions about policy.  We believe that one of the best ways to make the general public aware of these types of issues is by demonstrating all the types of art and culture that remix touches. To that end, on May 30th we will transform Galapagos into a multimedia art space for a full day/evening of:

In the past decade, digital hardware and software has allowed artists and consumers access to media-creating tools previously only available to professionals.   The result has been not only an explosion of user-generated media, but an explosion of creativity as well. Artists began applying remixing and mashup techniques borrowed from the music world, to digital video and film, creating new works of art using elements from other sources.

The art of remixing is now considered acceptable after being practiced for three decades in music, while artists remixing appropriated video and film are subject to lawsuits. We believe it’s time that the same legitimacy granted to music be granted to the visual arts as well.

The doctrine of fair use in U.S. copyright law allows copyrighted works to be used for “purposes such as criticism, comment, news reporting, teaching, scholarship, or research”.  We believe this should apply to any appropriation that uses the original in order to create something new, provided it doesn’t mitigate the potential market or value of the original work.   Since the 18th century, copyright laws allowed for these kinds of use. Today, software manufacturers and ISPs can circumvent this legal provision by building copy restriction mechanisms into the hardware itself, preventing artists from creatively remixing video, sound, words and images, even when the resulting works might fall under fair use.  The Digital Millennium Copyright Act of 1996 codified these types of restrictions, criminalizing the production of technology that circumvents measures that control access to copyrighted material.

Public domain laws have suffered similar setbacks.  Before 1964, copyright extended for a term of 28 years, today a copyright can last as long as 120 years and since 2008, the law gives the copyright holder the “exclusive right” to create derivative works.  This means that cultural phenomena such as Pop Art, which relied on reframing cultural icons, couldn’t emerge today without being sued into obscurity, nor would we have the works of Mozart, Shakespeare, or Thomas Edison.

The Festival aims to challenge the current laws by bringing public awareness to media mixing as a legitimate practice, while at the same time remaining within their boundaries of the law.  We are soliciting artists who remix responsibly. This does not mean claiming someone else’s work as your own, it means recognizing that every artist contributes to the global cultural library and works can and should be built upon, modified, and repurposed with the goal of bringing a new work of art into the world.

THIS MODERN WORLD? AN ‘ART AS BILLBOARD’ PROJECT FOR COOL DOCKS
New Works for the Collection- Blanton Museum of Art