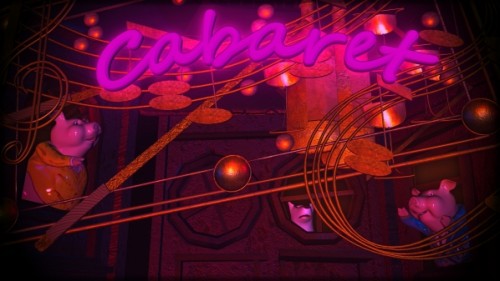 I am gonna debut the first piece of my new series about the Chinese internet censorship in this group show, please come! Here THANK YOU SO MUCH for Matthew Weinstein for curating the show!

‘Leave your troubles outside. So life is disappointing? Forget it. In here, life is beautiful.’

In the opening sequence of the American movie version of ‘Cabaret,’ a distinction is made by the Emcee between the interior of culture and the exterior of everything outside culture. As the film progresses, the character of Sally Bowles is the medium through which the outside, the political, passes through the wall of day-to-day life into the nucleus of culture.

Sally Bowles never acknowledges herself as a political protagonist, but because of her outrageousness she is a magnet for issues of sexuality and gender. She also becomes a witness to the most important issue of that time and place; race.

The character of Sally Bowles in the movie is far more talented than she is in ‘Berlin Stories.’ The Hollywood magnification of her talent, as well as the perfection of the production numbers, was of course driven by the mandate of the American film industry that life on screen must be more fabulous than life outside the movie theater. In this way the film about politics becomes the cabaret, an escapist fantasy, a respite from the year of 1972; the suspension of peace talks in Vietnam, The Munich Massacre, and a Time Magazine cover that read, ‘Is The U.S. Going Broke?’

This mixture of entertainment and politics, embodied by artists whose work can’t help but be political due to a certain social outrageousness, is what structures the choices of artists for this exhibition. Their work is a nucleus of permission, which is neither outside nor inside the arena of the political. Whether through seductive performances, Grand Guignol spectacles, or silent solo songs sung to evoke a sad and seductive past, each of these artists performs to draw us closer and closer to the dangerous and beautiful flashing lights.