Because Washington Is Hollywood For Ugly People 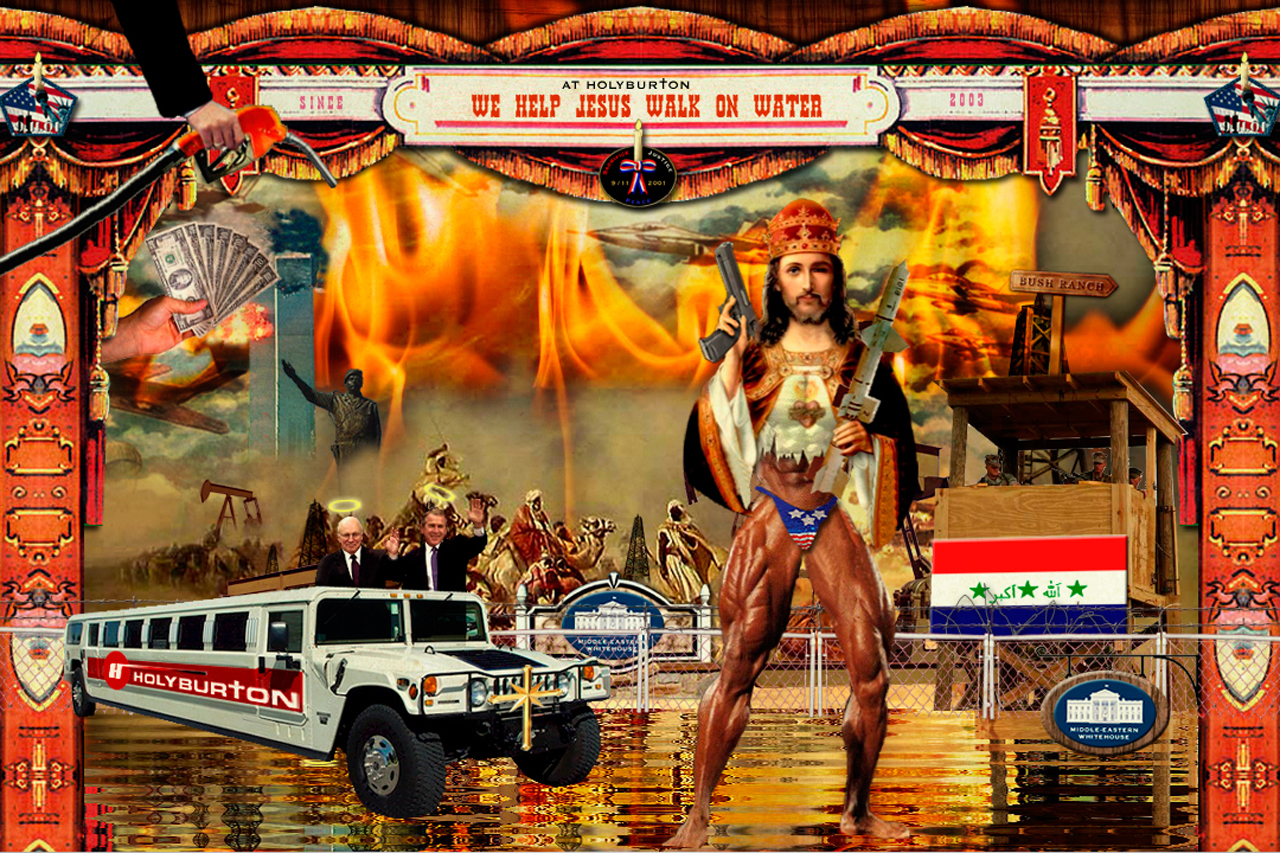 “Because Washington Is Hollywood For Ugly People” is a mixed media installation consists of two parts- a High Definition video and a papier mache structure with inkjet prints.

“Because Washington Is Hollywood For Ugly People” is a video/ animation that employs images from popular culture, political figures and imagery found in the internet. The piece adopts the form of viral advertising in a reduction of contemporary events to a cartoon like mythology while touching on issues such as identity politics, U.S. foreign policy, sexuality and power.

“Because Washington is Hollywood for Ugly People” is hitting hard at the hypocrisy of the political rhetoric from George W Bush years leading up to the 2008 presidential election. As hilarious as it is scary, the video merges internet-scavenged imagery and original animation with pop graphics to create semi-fictional relationships between political figures, corporations, and mass media iconography. Imagine Bush-headed Jennifer Aniston, Gozilla Arafat, Jesus bin Laden, Saddam Hussein on the skateboard, Kim Jong Il as Terminator, Hillary as multi-headed Asimo, Meccadonalds and more. The video is in the Official Selection of Sundance Film Festival 2008 and has been screening at various film festivals around the world.

The shape of the structure is a hybrid between United States Capital Hill Building and a Muslim Mosque. The construction appropriates the concept of papier mache puppets at the peace protest, using cheap and recycled materials- selected newspapers headlines (symbolize White House manipulation of the mass media), chicken wire (metaphor of “Chicken Hawk“) and 2″ X 4” lumber. The structure is visually levitated 26 inches from the ground to symbolize our unstable political and economical situation.

On top of the papier mache a word “HOLYWOOD” is spelled with various declassified documents and legal writings printed on US letter size papers:

MC Paul Barman is an artist and language innovator based in New York City. His first record “It’s Very Stimulating” brought new life to hip-hop and garnered a four star review in Rolling Stone. The creator of theme songs, tag lines, and new products, he has performed extensively across America and a lil bit in Europe. More info at www.mcpaulbarman.com

John Blue is a composer who writes and performs music for film. With a focus on documentary and experimental work, the compositions have ranged from classical compositions for solo and ensemble, to modern Americana inspired guitar and sound collage.

His soundtracks for film have shown in festivals internationally, and have received numerous awards worldwide. Crystal Harvest and Suspension were both awarded Golden Spires at the San Francisco International Film Festival. As Láthair received an award from the Irish Arts Council for Experimental video, while the narrative short Timmy’s Wish was voted Best of the Fest at the Humboldt International Film Festival and the audience award at Valleyfest.

His compositions for dance and theatre have been performed at Hebbel Am Ufer in Berlin, the Bardovan Opera House in New York, Highways in Los Angeles, and in San Franisco ODC, Yerba Buena Center for the Arts, the Herbst Theatre, and Theater Artaud.

He is a founding member of A Thousand Pieces, an interdisciplinary artist collective creating music, film and dance together since 1994.

As a musician he has appeared as a guest with many bands, most recently playing on a track from the Talkincircles album for the Willowz as a cellist and producing a video for the song Heartstrings from the same record. He has also appeared with Nelly Bly, Shana Falana, Fuzzy Star in New York and Los Angeles.