New York Times review on Not Your Parent’s MTV @ Postmasters 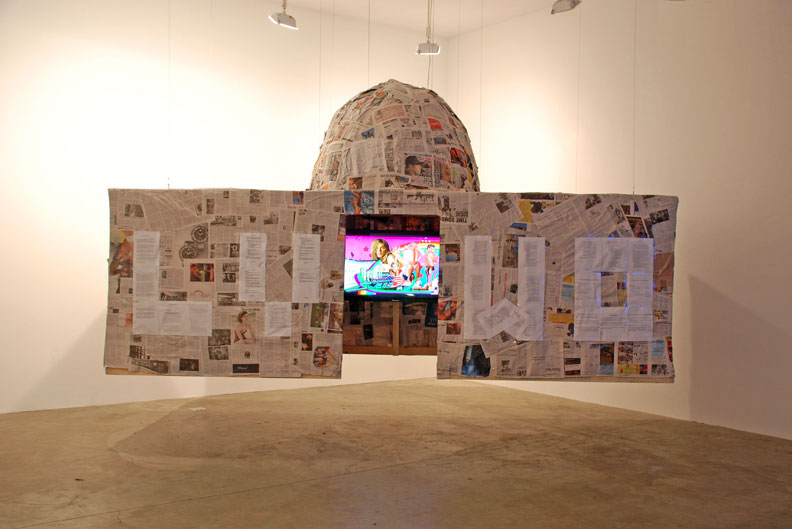 Several of the summer’s gallery group shows are dominated by one outstanding work. Here, among mostly credible riffs on or departures from the music-video convention, the big draw is Kenneth Tin-Kin Hung’s “Because Washington Is Hollywood for Ugly People.” A hilarious, scarifying portrayal of the nation’s leadership and its machinations around the war in Iraq, this work is exhibited inside a newsprint structure that is part mosque, part United States Congress.

The video itself adds very sharp teeth and a bit of scatology to the hot colors and dense collages of 1960s psychedelia. Its low-tech animation allows images to function as independent wholes and as part of the action, and it is perfectly backed by the music of MC Paul Barman, careering wildly between disco and rant. In total, it is like the cover of the Beatles’ “Sgt. Pepper” album or the credits of the Monty Python television show, with jet fuel.

Born in Hong Kong, Mr. Hung earned a bachelor’s degree in art from San Francisco State University in 2001 and now lives in New York. He has exhibited in digital and Internet art shows and festivals around the world and a few San Francisco galleries but is most visible on his Web site, tinkin.com. According to the site’s biography of the artist, this brashly beautiful, furious work is his first to be shown in New York. Take notice. ROBERTA SMITH