Democracy in America: The National Campaign 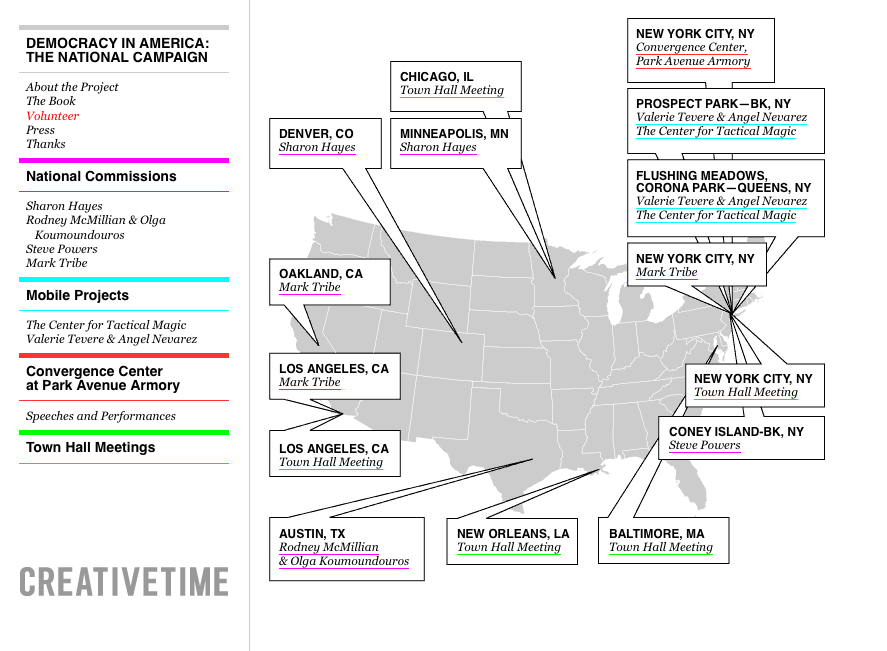 My works is part of this huge show “Democracy in America: The National Campaign” curated by Mr. Nato Thompson. Mine is gonna be in the CONVERGENCE CENTER AT PARK AVENUE ARMORY:

Creative Time is pleased to announce the largest public art initiative in its 34-year history, Democracy in America: The National Campaign. A multifaceted project on a national scale, Democracy in America travels across the country to take the temperature of artists’ relationships with and reactions to the historic roots and practical manifestations of the American democratic tradition. Creative Time will promote active participation and open discourse during the 2008 election season and beyond by engaging a diverse community of artists, activists, thinkers, and citizens to create spaces for dialogue, exploration, and congregation. The project includes: a 7-day exhibition at the historic landmark Park Avenue Armory, performative artist commissions from coast to coast and at the RNC and DNC, mobile projects visiting communities in Queens and Brooklyn, and a publication giving artists a platform to reflect on democracy in this country. Democracy in America: The National Campaign is curated by Nato Thompson.

After traveling across the country to glean perspectives from artists and activists on the state of democracy, Creative Time’s year-long program Democracy in America: The National Campaign culminates in the “Convergence Center”: a major exhibition, participatory project space, and meeting hall mounted in New York City’s Park Avenue Armory. The Convergence Center at Park Avenue Armory will provide an activated space to both reflect on and perform democracy and will be punctuated by speeches by leading political thinkers as well as community leaders and activists throughout the run of its program. These orations are organized by Creative Time in collaboration with The Nation Institute. As one of the largest unobstructed spaces in New York, the non-traditional setting of the Armory features interiors—such as its vast drill hall and historic period rooms—that are ideal for artists presenting multifaceted visual and performing arts productions.

Work by more than 40 artists will fill the Armory’s period rooms on the first, second, and fourth floors as well as Wade Thompson Drill Hall. Creative Time will present the four performative national public art commissions made for Democracy in America in the Convergence Center at Park Avenue Armory. Some of the projects featured include giant, silvered surveillance balloons by Jon Kessler; wearable art by dBFoundation; an installation by Critical Art Ensemble and the Institute for Applied Autonomy of the physical artifacts of the 2004 FBI investigation of Steve Kurtz; a 20-foot-tall counter-surveillance tower by Jenny Polak; a nine-foot wooden hobbyhorse sculpture by Allison Smith; and Duke Riley’s functional replica of America’s first submarine. In addition, curator Sofía Hernández Chong Cuy organized the inclusion of work by four international artists that will offer incisive viewpoints on the notion of democracy and some of its core principles: nation building, freedom of speech, and labor rights. Three participatory projects will travel to parks in Queens and Brooklyn in early September before convening at the Convergence Center.

A diverse group of political thinkers, writers, theorists, and activists will be invited to deliver speeches on various subjects—including local city politics, the war on “terror,” the art world, and cultural production. Speeches will occur throughout each day the Convergence Center is open, punctuating the activity of the Wade Thompson Drill Hall’s participatory projects and social space. As speakers approach the front of the hall, they will be invited to select a podium from an array designed by artist Paul Ramirez Jonas—from a modest soapbox to an intimidating rostrum. A 40-foot backdrop by artist Chris Stain will frame the speakers in a social realist scene rendered through the technique of hand-cut stencils. In addition, select artists from the show—including Rachel Mason, and Pia Lindman—will give special performances. Lastly, local activist organizations will be invited to distribute information from tables set up throughout the space.