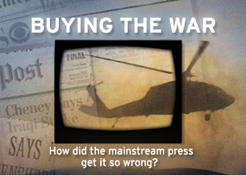 Watch it, you won’t regret it. All I can say is this documentary should have come out at least 4 years ago, or right before the last election. Now every fucked-up things Bush wanted to do is done. The only independent media is you. Start a website, grab a DV camera, start your own news.
“Buying the War” examines the press coverage in the lead-up to the war as evidence of a paradigm shift in the role of journalists in democracy and asks, four years after the invasion, what’s changed? “More and more the media become, I think, common carriers of administration statements and critics of the administration,” says THE WASHINGTON POST’s Walter Pincus. “We’ve sort of given up being independent on our own.”