A Portable Refinery Powered by Garbage 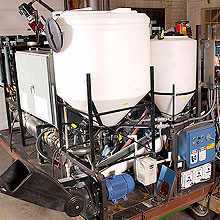 “Researchers at Purdue University have led development of a portable “tactical” biorefinery for the U.S. Army that turns a variety of waste streams into a mixture of ethanol and methane gas, which are burned in a modified diesel engine to produce electricity. The unique hybrid design–part gasifier, part bioreactor, part generator–limits the need for diesel fuel while reducing the waste produced by soldiers in the field. Two prototypes will take part in a six-month demonstration later this year. Civilian applications are also being considered.”